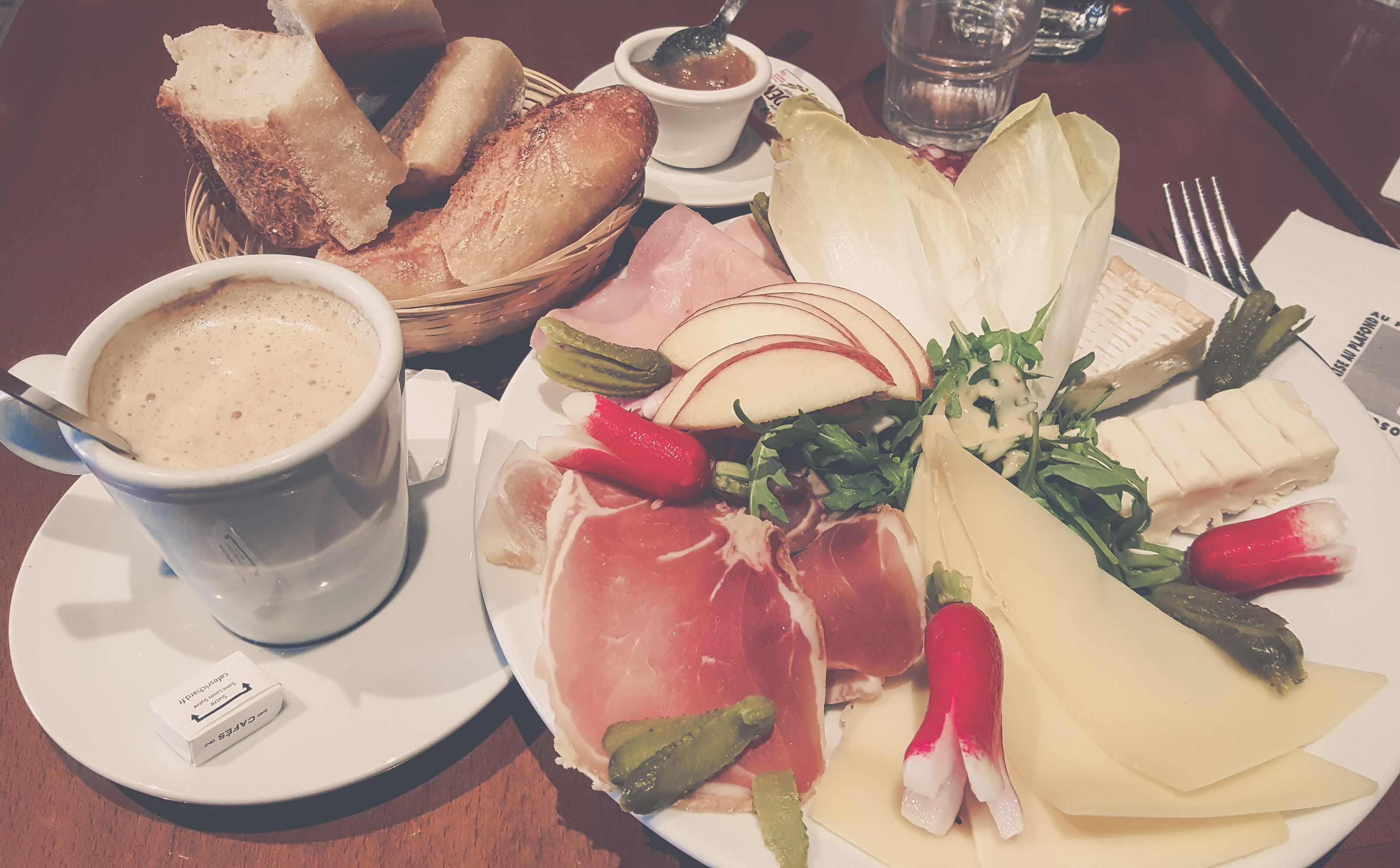 My best friend, in Europe for the first time, wanted to buy a pair of sunglasses at Chanel.  We’d have four short days in Paris, a city she had always dreamed of visiting and, arguably, the very Mecca of fashion. Forget the Louvre, the Arc de Triomphe, Notre Dame: we had a mission.

The very first morning, Google informed us that the flat we’d rented was indeed within walking distance of Chanel’s flagship store. It also cheerfully noted we’d chosen a breezy, overcast, and quite possibly rainy 52F April afternoon for our little excursion.  But my friend is a true Rocky Mountain girl, tough to the core, and I pack layers as a rule.  Undaunted, we bundled up and set off.

For three blocks, by silent mutual agreement, we ignored the fact that we could see our own breath. We were eager to be charmed, and pointed out to each other every curliqued cornice above every window.  We gushed over the misty sea-green patina of a life-sized horse-and-rider bronze, and scoffed at the gaudy gold-plated finials above an otherwise classy wrought-iron fence. Airily, we admired how the buildings in our chic little neighbourhood stayed true to what we saw as the classic French country palette: cool whites and warm grey-blues, complemented every now and then by a watery yellow, the very shade of a grey-skinned, overboiled yolk.

By the fifth block, I was chilled to the core.  Hey–I may be Canadian, but I’ve lived in Saudi Arabia for the past six years.  My blood has thinned.

Right around the seventh block mark, I veered, without warning, into a second-hand clothing store, lured by a quick, opened-door view of a rack of winter coats.  Coats with hoods.  Fur-lined hoods.

Sometimes it can feel like my best friend and I know all there is to know about each other.  We’re familiar with the smallest contours of our vastly different tastes–and also the sharp-edged limits of each other’s comfort zones.   I knew I’d have about five minutes in the packed little shop, crammed as it was with clothes that, designer or otherwise, may or may not release the smell of strangers’ old sweat and various other body odours when you flipped through them on the racks.  I’d tried to take her “hunting” before, more than once, but my efforts at desensitization were all failures.

This was our first day, though, and the girl was in Paris.  She came in with me and gamely held my plum-coloured denim jacket as I thumbed through the heavier coats.  By the grace of the thrift store angels, I managed to pluck out a warm one—all down-puffed and fur-collared, yet somewhat fashionable, somewhat affordable—in under four minutes.  Score!

I bought the coat and we squeezed out of the dark, stuffy space and back up onto the sidewalk.  The sky was one solid cloud, matte-white and still frigid.  She buttoned my plum jacket on right over her own and we carried on, both cozier than we’d been minutes before.  We congratulated each other out loud—and ourselves, I’m sure, privately.

Chanel turned out to be one of several designer stores lining a softly lit and pristine commercial space I hesitate to call a “mall,” because it would seem like an insult.  Posted just outside the entrance was a security guard, and at his feet, a German Shepherd.  The massive dog lay with his head between his paws, chin resting on the curb, nearly motionless.  He looked for all the world like he was about to slip into an afternoon nap.  That is, if you didn’t notice the way those honey-brown eyes flicked back and forth along the sidewalk, tracking each passerby.  I watched the dog’s dark eyebrows twitch up and down independently—first the left, then the right—in a rhythm so regular it was eerie.

It heralded what could hardly be a more different shopping experience, of course.

Inside the Chanel store, a linebacker-looking security guard in an expensive suit and an earwire stepped forward to “tsk” my friend when she tried to inspect a pair of sunglasses herself.  Despite his lack of English and our lack of French, the message was clear: we would wait to be served.

We lingered in front of the backlit sunglasses in the near-dark for a full ten minutes before any of the salespeople even glanced at us.  My friend was finally able to try on the two or three pairs she’d been patiently eyeing.  I declined, politely, when the saleswoman looked over at me to take a turn.  I was afraid to move my arms, let alone touch anything.  I’d knock something over for sure, cause a scene.  Get us booted back to the outskirts of this unmall-like mall, banished to the Guess and Michael Kors sections–oh, the shame!

My friend didn’t buy anything at Chanel.  Or Gucci.  Or Louis Vuitton.  She did run a fingernail rather expertly along the edges of a half-dozen pastel, pebbled-leather wallets in the Prada store.  A thin fifty-something saleswoman, her salt-and-pepper hair snugged up in a tight chignon, had placed the wallets between them on the glass counter.  Rather reluctantly, I thought.  The woman had too-smooth skin, and the unlikeliest of bright red Liv Tyler lips.  When we first walked in, her eyes had flicked over us the same way the German Shepherd’s had.

I started to sweat.  I had already taken off the down coat, draped it over one arm, and mashed it against my side.  I looked around for a chair, one of those mercies they surely provided for long-suffering husbands at places like these.  No luck.  I bit my nail.  My friend looked up, sent me a gently mocking half-smile.  I rolled my eyes in reply.  She could have stayed there all day, patiently giving those snotty salespeople a run for their money.  I knew she was hurrying, for my sake.

A minute later, we stepped out of the building and into an alternate universe, under what felt like an entirely different intensity of light.  The sidewalk was dark–soaked through!–and dotted with fresh puddles.  The sky was a deep gun-metal grey, and broody on every horizon.  The sun had slid beneath the storm, levered it away from us.  Now everything–the asphalt, the bicyclists, the Renaults and Peugeots swishing by—glittered in that strange, silvery-bright finish of a sun shower.  Now and then, one of the few fat droplets still falling would splat against our foreheads at the hairline as we looked up and down the street in wonder.  The air was so crisp you couldn’t smell a thing.  We’d just missed the downpour; now it was both cold and damp.  But none of that mattered.

We were warm now, and pleasantly tired, and ready to order Americanos under the burgundy awning of the awfully cute café across the street.  Maybe share a crème brulee, to celebrate.  We’d gone shopping together—in Paris—and survived.  Everything after this would be cake.

We wandered around the city for the next three days–gloriously, without plan or purpose–and didn’t shop again.  We invested, instead, in each other.

We spent hours under heated awnings in cafés and restaurants across the city, just talking. Side by side, warmed by a little Bailey’s in our cocoa, we worked away at unsnarling the various knots in our lives and lent each other some much-needed perspective.

French cafés proved surprisingly perfect for this.  We could wave the Parisians’ cigarette smoke away from our eyes, and blame it for our tears.  We could dial down the intensity and just people-watch, or strike up conversations with exotic strangers at the tables next to us.  In cafés across Paris, we took advantage of the chance to explore politics and religion and family junk and all the other things that prove hard to get into, in depth, when you live 7,500 miles apart.  Best of all, we laughed ourselves silly–at others, at each other, at ourselves–more than a few times.

Neither of us bought much you could take home, in the end.  Instead, we café-d so much that the word became a verb.  By the end of those four days, it was sewn right into our private lexicon—compliments of Paris.

The Other Men in My Life (Saudi Arabia)