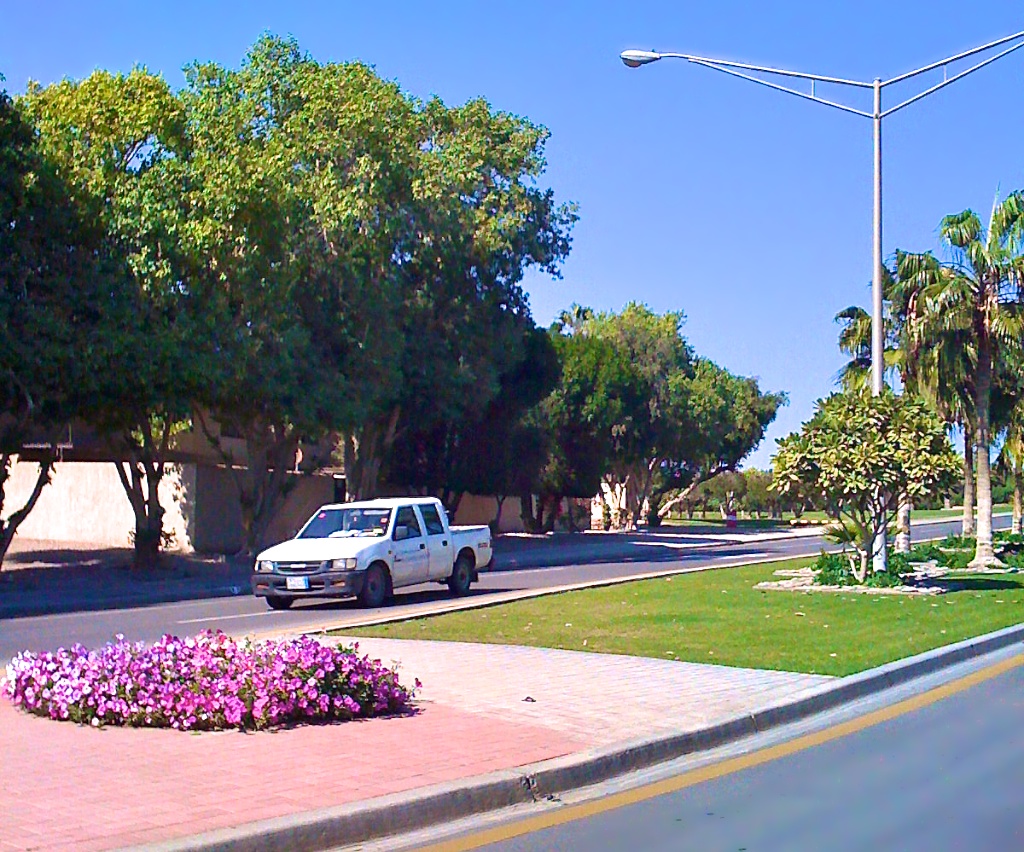 The Other Men in My Life (Saudi Arabia)

Cap and I have taken to referring to life here on the compound as ‘our little alternate reality’. This is short for our shared awareness of getting on a plane a fortnight ago, expecting our wheels to set down in a new country… and somehow landing in a whole new universe.

It looks, smells, and sounds like small-town Americana, it’s true.  Yes, there’s sand instead of soil, and long loops and dots in place of a familiar alphabet on street signs – but it could pass as a cozy suburban community in Arizona.

If everyone in Phoenix had a gardener. And if said gardener circled the house in slow motion twice a day, eternally hosing off sidewalks and talking to himself in Bangladeshi.

There are many clues to tip off a girl to the fact that she’s not in Kansas anymore, Toto – but perhaps the first is the Arrangement of Help. Or should I say the Onslaught of Help. One minute we’re struggling to pay off debts (okay, so that applied to one of us), eating weenies and beans… the next minute the doorbell is ringing on our first morning here with eager applicants for the (unadvertised and so-brand-spankin-new-we-didn’t-know-they-existed) positions of Norling gardener, houseboy, nanny and personal driver:

Heriz card, madam. Heriz mobile number, you call me. You want good maid? Need hahndee-mahn? No problem, muhm(rhymes with ‘sum’ when said with a Philipino accent). I take care of for you, no problem.

The awe-inspiring and somehow frightening truth is that a woman literally need not lift a finger here, if she doesn’t want to. Heck, even if she wants to:

Everywhere I go, I’m wrestling with grocers to carry my own bags, with shop owners to return my own cart or load my own taxi, with fast food waitstaff to clear my own dishes or wipe my own spill.

On just about any given parking lot on camp, the moment I shut my door there is a very nice young brown-skinned man smiling at me with his rag and bucket, eager to wash my car given half a nod of assent.

When I pop in to the cafeteria/dining hall for takeout, there is a white-uniformed guy who grabs the food tray almost before I pay the cashier. I follow him and awkwardly wait as he places my styrofoam containers on his tidy station and makes a production of stacking them in plastic bags, tying each with a flourish and a ‘just-so’ little knot handle.

Seriously? Yes, seriously. They work for tips, you see. And my 10 riyals ($2.67 USD/$2.95 CAD) in their pocket adds up slowly but surely, sent back to Thailand or Java or Kashmir.

I find myself wondering what the stories are behind the drivers, the anonymous men who drive me around the streets of the city outside the compound. We’re often barely able to understand each other, but I want to ask each about his wife back home.  Are there kids waiting year after year for him to make enough to come back for awhile – or to bring them to Saudi? I’d like to know what he thinks of this land, its citizens and customs. I want to know what it’s like in his country. But I have no experience in being rich (yes–applying my previous definition of rich, a mansions-and-diamond-rings rich, because it is exactly appropriate in context), so I sit there silent and ashamed.

Some are open to small talk. If they ask where I’m from, I say I’m Canadian: best to hold the dirty little American green card and American husband secret close to my chest. Sometimes this elicits an approving nod, or a relieved pronouncement that Canada is a good country. When I discover where they’re from and say (sincerely) that I plan to visit there someday, they always seem genuinely thrilled. It didn’t occur to me until just now (when I’m no longer in the car, of course) that such a statement could be construed as bragging about having personal wealth in such excess, enough for far-flung vacations. Like I said: I have no experience in being rich.

Or in being a madam, muhm, or miss. Or in firing people.

We don’t have a houseboy (Cap hooks his thumb at our offspring and says we have a houseboy AND a housegirl)*. We don’t have a nanny (though very commonplace and downright tempting, this is mostly because I know in my gut it’s an indulgence I would pay for dearly in the kids’ latter years. It’s okay for some, but methinks circumstances would render it very dangerous in our case). What we DO have, like it or not, is a gardener. Amirhossian, the other man in my life.

Amir is actually a replacement for the first guy, whose name I never caught yet still had the unpleasant task of firing. Gardeners here, we’ve learned, are very territorial… and also quite willing to go to battle in semi-literal turf wars.

The morning after we arrived, the first guy (we’ll call him Tom, though I’m absolutely certain that’s not his real name) knocked on our door at the crack of dawn. Cap answered and in a jet-lagged blur told Tom to return in two weeks. Tom returned the next day… and the next… and the next. He was everywhere.  Hosing the grass.  Hosing the front steps.  Hosing the sidewalks. Twice at day. At the very least. I had to make sure the drapes were drawn in our bedroom, because he let himself into the backyard somewhere around 7 AM every day of the week. To hose. And no, we do not have sandstorms every day, necessitating the gale-force hosing of all things concrete or green. The irony of such water wastage in the desert kills me.

Once, when he obviously had to go somewhere all day and wouldn’t be around to defend his turf, he set a sprinkler in our tiny front lawn after his morning shift. This was before we even had grass planted, so it was watering our forlorn little patch of sand.  When I got home later that afternoon, it was still on… flooding not only our house foundation but the front sidewalk, and running down the entire street.

I suppose the sprinkler incident kept other gardeners away, but that was about when I started bugging Cap to fire him.

“But I didn’t hire him!” he protested, and gave me a nice stack of riyals to give to Tom “on the way out.”

Given young Tom’s verrrry limited English and smiling determination, I was not at all sure our conversation would end with a successful termination. Sure enough, it took four days and some reluctant and regretful shooing gestures on my part, but Tom finally got the idea.

(Sidenote: Tom still hangs around the neighbourhood, smiling and waving shyly yet hopefully whenever he sees me. I feel better about us though, because I once roped my driver (an Indian man who seems to speak everything) into pulling over one day and translating to Tom the universal “it’s not you, it’s me” message. If only he understood more English, I conveyed, we might have worked out….  It was kind of sad at the time, but delivered some closure too. I think.)

Amir showed up as part of a company-employed work crew, planting the standard-issue new grass in my backyard. Middle-aged, he approached me quietly after the work was done, with the inevitable “You need gard’ner/electrician/carpenter/etc, muhm?” that often marks the end of a company project. In this case, I did. Well, not exactly – but at the moment I was so impressed with being able to clearly understand his English that I hired him on the spot. Mark this, because it’s not the first time I end up hiring someone just because I thought we could understand each other, not necessarily on the quality of the work.

Turns out “You need gard’ner, mum?” is Amir’s only English phrase. Well, that and “No problem, muhm, no problem.” And while I am, in fact, taking the first of several offered Community Ed courses on learning Arabic, I’m afraid my Bangladeshi is not up to par. Which is not necessarily a bad thing, considering that time I walked in front of the backyard’s sliding glass door in my housecoat. I sensed something and froze mid-stride, and he looked up and froze mid-stride, to the shock of both of us. I think I gave a little shriek and scurried away. Neither of us have mentioned it, in any language.

Which brings us back to… a lot of hosing.

It’s not really his fault, I guess. There’s just not a lot to do yet in the Norling yard. Things are in process – I designed a patio, planters, windowboxes, storage bench. Amir, trying to impress, kept wanting to bring me flowers, pointing out neighbours’ yards he liked. I had to keep putting him off with crossed, waved arms in the universal pantomime for “No” – I had a plan, would that I could explain it all to him. I think he got it the morning the irrigators showed up to put in automatic sprinklers. He looked a little crestfallen, until I pantomimed that he could wash the car for something to do. Instead of hosing. Enough with the damn hosing already.

It’s a strange, strange dynamic; the hausfrau and the Help. For one thing, this is a male-dominated culture. It is a little backward here for a woman to be in charge, and we all know that. The other thing that permeates interactions, even when neither party is a native, is a cultural policy here of never telling someone you don’t know the answer. If you don’t know the answer, you either tell the person SOMETHING, even if it’s wrong, or – if absolutely necessary – tell them you will find out. But you don’t say you don’t know, or that you don’t understand the question. With Amir, as with Sheikh the driver and Manik the handyman, I leave every conversation wondering exactly what the other person understood, and if it matches what I took away from it. Amir smiles – white teeth glowing in a dark face – gives me another no problem, and merrily goes about his business. Who knows what he thinks of the crazy hovering Western lady.

So I ask Amir to plant some Bahraini lilies, something to do. And he does, and I watch him out the window through the shades, and I see that he plops them in the ground, not using the fertilizer or potting soil amendment I bought and placed beside the site. So I wait til he leaves, then dig them up and do it again, trying not to make it too obvious. Because this is what we do. He waters the snot out of something until its leaves turn yellow, and I replace it. It’s what we do. If I complain to Cap, he reminds me what we pay Amir: the equivalent of $40 USD a month. And I feel like a jerk, and shut up about it. I also don’t think I have the heart to fire anyone else. So while we don’t have a houseboy or a nanny, Amirhossian will probably be here for the long haul, hosing away to his heart’s content.

Plus, he’s seen me in my housecoat. Practically family.

*This is no longer true.  And that’s a story in itself, best saved for another time.